Interview with a Foster Carer - Rowshonara

What sparked your interest in foster caring?

I think for us as a family it was when I was seeing that my children were grown and getting on with their own pursuits and I realised that my husband was on his own at home most of the time. I thought, how could we use that positively? I then saw fostering being advertised and spoke to my husband about it and we attended an open event. I thought ‘why not do something and make a difference to other people?’ We wanted to find a way to build bridges and giving back to the community.

Do you think there’s a perception of foster caring?

I think a lot of the time I hear it’s a very tough and challenging job. You need to be very strong and you need to know the role well in order to look after these children. That perception in the media really puts people off, especially articles around carers being investigated. It makes it seem as if you’re whole family is going to be traumatised. I had my extended family asking me why I was even thinking about it, I was asked whether I was only looking to foster children from a Bengali background because I’m Bangladeshi, but I said that I was open to having all children, that their background didn’t matter to me.

There was fear there. I’ve cared for family children and had other children in our home from friends, and children’s friends of other religious backgrounds that came round. But these children were fine, they didn’t see me as any different. They didn’t look at my headscarf, they didn’t look at the colour of my skin, when we were round the table they would join in with us eating with our hands. We offered them cutlery, but these children wanted to join in, practice and see what it was like. When I remembered those times, it reminded me that children are children and it is how we teach them, and what society teaches them is what they actually learn.

My family and my children are very broad minded, they’ve never had any problem with any culture or religion, so we knew we could pass that on. Once we started sharing our experience with extended family who had concerns they were really overridden. When you engage and open your doors, other people often follow suit.

Can you tell me a bit about your own background and the children you look after?

We’ve had so many children and we’ve had them from all kinds of backgrounds, white, mixed heritage, Black African, European, Kurdish, children who are practicing Muslims and all kinds of age ranges. 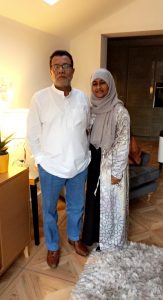 We had two brothers, and one was happily joining in with our method of eating with our hands whereas the other was horrified. But we said “that’s absolutely fine”, and talked about different cultures and their eating habits; how some people use chopsticks, some use their hands, some use knife and fork, foods like chapatis and pizza, fish and chips. We talked about different countries and on the third day he was absolutely fine. Just to see that change and growth at age 7 or 8, I’m sure that’s going to stay with him.

The difference it has made to him is so positive as he’s now more aware. I remember at first he would disturb my prayers because he didn’t understand that I couldn’t give him attention then. After a while, when he heard the call to prayer he would come and lay a mat down and join in and tell me what to do. We learn from each other, and he told me his style and we honoured that but also shared our routines.

We aren’t necessarily the traditional Bengali family, my husband is home and he does the cooking and the cleaning. Whereas, I’m the one who’s working fulltime. The roles in our family change a lot, and I’m not the typical woman who wears a headscarf who stays home and cooks. Part of sharing is not just our beliefs and understanding but our routine.

Have you fostered any children who would be classified as BAME?

We’ve taken all kinds of children from every background possible including those considered BAME.

If so, how you try to honour the child’s individual cultural identity?

We often try to shop in different shops that have had food from other countries so that we can ensure the children have these little comforts.

When a child doesn’t understand the language, it can be tricky, especially if you cannot get an interpreter. But we often use physical cues, bringing the items or images of the items to start drawing together a common language. My husband often does this one-to-one and often this is without the child’s full information as they’ve arrived without it and you have to discover together.

Eventually however you can use a child’s background to educate the whole circle around the child, not just the family but all the workers around them. As you start to know the child better they can help lead you, it’s like any relationship.

What advice would you give to carers when discussing race, culture and identity?

I think for me, we have a WhatsApp group, about six or seven carers together we ask each other questions. I think some people feel nervous about that but it really is about helping each other. You shouldn’t be afraid or worry about asking the question to people who you can go to and talk to. That’s how we can build bridges, by clearing our thoughts and not always trusting online. Families are different.

Even as I said earlier, my husband does the cooking and I work because I am able to. He loves being home, collecting his children, he’ll always be the parent who’s 10 minutes early to pick up. We’ve had it where we’ve had social workers here and he’s left to get the child but didn’t explain. Once I explained that he didn’t understand to say, that in his culture it’s rude to interrupt but you must be punctual, there was better understanding. It was about sharing our family practices, it might be different in every family.

In our family we only ever take and pass things with our right hand. But if you’re left handed, what do you do? My brother taught my sister who was left-handed to eat with her right hand. My parents would give up because she’s the youngest, but my brother would sit and teach her. These things are different between every family, we eat round the table still, whereas some don’t. So if you know somebody, go to them and ask questions, not every family follows rituals, it can change from every generation.

Create really good relationships with those around you, friends or neighbours, and don’t be afraid to share who you are and ask questions in return. Talk to people, colleagues, and children’s friends even. Especially with the children in your care, ask them about themselves.

What has been your favourite thing about fostering?

We love going on community days out and meeting other families. These are nice because you get to see other families that you’re connected to who understand it fully. The child in your care doesn’t feel like the only child in that situation, and that they’re celebrated and that fostering is positive. They’re our future and they’re going to be the change we see. I love when a child leaves but they keep in touch. I realise then that I’m doing a really good job. When they call me mum, or auntie, it’s very rewarding. I realised that for this role I give everything I can, and a child will feel that. They don’t come with guilt, they know they’re totally innocent and what you give them brings change in them. I want my family to be the reason in their lives that they thought about family positively.

I remember my first year, one of the children commented on a picture on Facebook that he “would always remember this lady (me), she gave me a prayer mat and she gave me dates”. My husband had come across the dates that the child would have had in his country and he remembered that.
Words really can’t express. Fostering can be tough but it’s so worth it.

What was the most surprising thing for you about your fostering journey?

The most surprising event happened when we started taking Unaccompanied Asylum Seeking Minors out of hours. When they first arrive, we didn’t realise that they arrived in a border control van. I didn’t know because they would often arrive at night and I wouldn’t see it. On one occasion, I was waiting for them and then a van pulled up saying ‘border control’ and I said “is this how you bring these children into my house?”

Can you imagine, being a Muslim, living in a conservation area where your neighbours know everyone and that van arrives? I was horrified. That was one of the most shocking things I’ve come across. I had to start warning my neighbours. Here I am helping the local authority taking care of children, but the van makes you both look like criminals. So the role can change beyond your imagination. Thank god my neighbours know now.

What would you say to anyone considering fostering?

Do your research. Talk to people at the different events and the carers there. Look into visiting if there’s an opportunity. It can take a long time to decide but really seeing it can help. Talk to people as much as you can. Your fears can all be answered and there are people who can explain about what’s involved and how much support you’ll receive. There are support services 24/7 and that’s really reassuring, and carers in the community are fantastic at offering advice.